Abstract
Introduction
Prostate cancer is one of the most prevalent cancers among men. An increase of 35,126 new cases is expected by 2020 in Spain alone. The aim of this review is to study the relationship between obesity and the prognosis of prostate cancer, which is playing an increasingly important role in our health system.
Method
A systematic search in several databases (MEDLINE, Web of Science core collection and SCOPUS) was conducted. This search included only observational studies (cohort and case-control studies) from 2015 to
February 2020 on prostate cancer-specific mortality and one obesity marker (body mass index, BMI). The data extracted are the Hazard Ratio.
Results
8 studies (7 prospective cohorts and 1 retrospective cohort) were obtained from the search carried out for this review and their Hazard Ratio was analyzed. A positive association was obtained in 5 studies for a
BMI>27.5 kg/m² and BMI<22.5 kg/m². Paradoxically, one associated a protective association for a BMI<25 kg/m².
Conclusion
The literature reviewed indicates that obesity appears to be a bad prognostic factor in prostate cancer. However, there is not enough scientific evidence to validate this statement as no studies with conclusive
results were found. Therefore, more studies with other, more specific obesity factors are needed in order to conduct a more comprehensive analysis to confirm this association.

Prostate cancer (PC) is one of the most common cancers among men. According to data from the Spanish Society of Medical Oncology (SEOM, by its Spanish acronym), PC was the second most diagnosed in cancer in 2018, and the first in 2020 (1). Due to its prevalence, it is (along with other cancers) a public health problem. In terms of mortality, PC is the third in Spain, after lung and colorectal cancer. Despite this, it has a 5-year age-adjusted survival rate  of 89.8% (observed: 78.9%) according to data from the Spanish Network of Cancer Registry (2008-2013) (2).

Its prognosis is influenced by several factors: morphological parameters of the tumor, histological type, location, perineural invasion, lymphovascular invasion, DNA ploidy, cell proliferation rate, p53 mutation, BCL2 gene, p27 gene, COX-2 overexpression, factor B and E-cadherin and whether it has an androgen receptor or not. (3). All these variables are influenced by diet, occupational factors, social factors, tobacco and alcohol, infectious diseases, hormonal stimulation, ethnicity and obesity (4). Obesity is beginning to play an increasingly important role in the development and prognosis of PC. When relating obesity to its etiological role, there does not seem to be a significant relationship in the literature with the risk of suffering PC (5). Its relationship with prognosis, however, is more doubtful. (6). Nonetheless, the body mass index (BMI), abdominal circumference and weight, which are markers of obesity, are used to decide on treatment and predict its response (7).

Only those articles from January 2015 to February 2020 were included,  taking into account that they were original observational cohort and case/control articles, carried out in humans, and written in Spanish and/or English. A general review of titles and abstracts was then conducted by both authors (P.O. and J.J.P.). The exclusion criteria were: 1) articles  dealing with  crude death rate of PC and not with net death rate (PCSM), 2) that did not use BMI as marker of obesity, 3)  in which weight loss was part of PC treatment, 4) in which only crude death rate was considered, 5) that considered obesity as a risk factor for the disease, 6) in which ill patients were compared to healthy patients, 7) that were either meta-analysis or reviews that resembled this one.

After the application of the previous method, 61 potentially useful articles were obtained. Of those, 40 were discarded since they were previous to 2015. Next, full texts were analyzed thoroughly, applying the same selection criteria. Eventually,  8 articles (Figure 1) were selected: 7 were prospective cohort studies (9-15), and 1 was a retrospective cohort study (16) (Table 1). 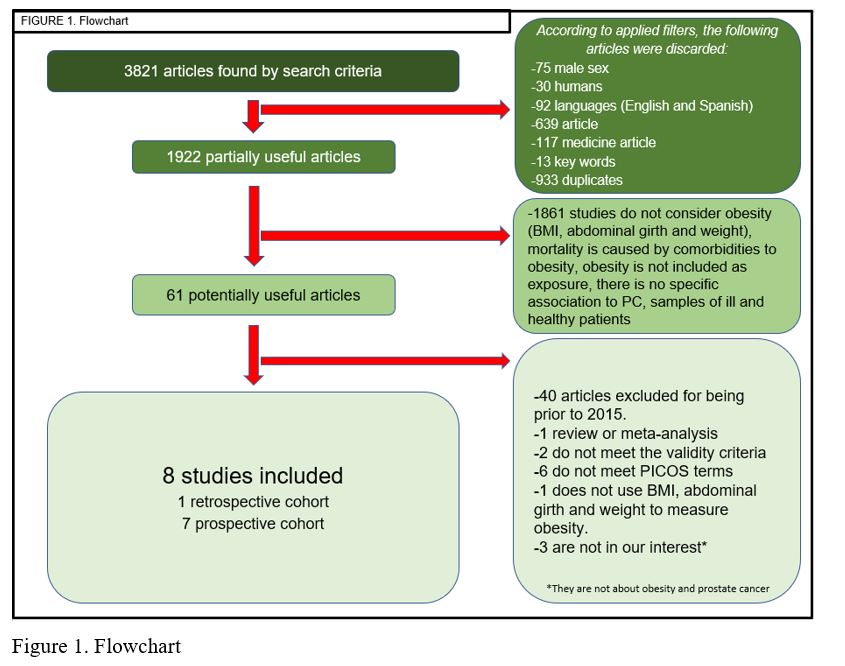 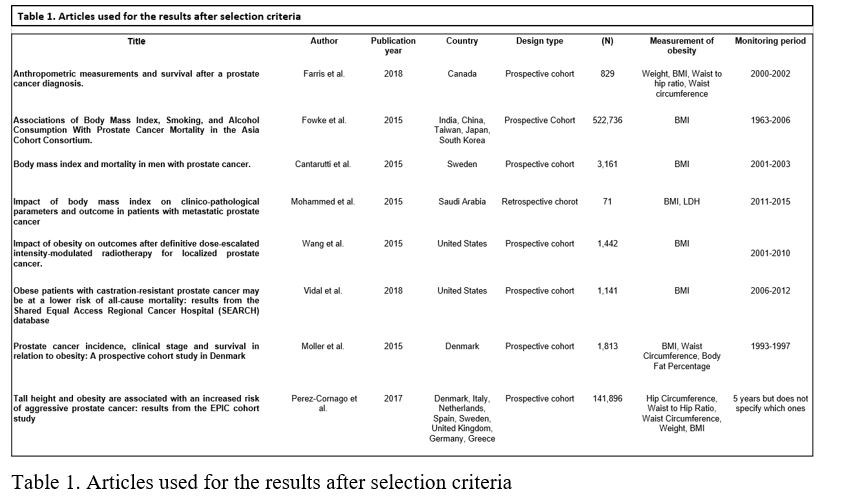 None of these studies showed a statistically significant association between obesity and PCSM, except Moller et al. (14), in which it did exist for patients with BMI>30 kg/m2, although it was the non-adjusted value. 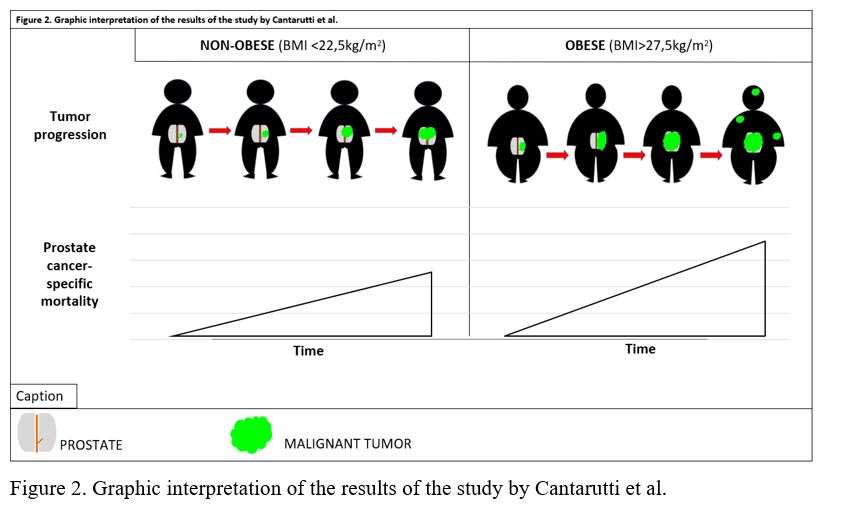 A range of possible answers have been found in the analyzed studies, some of which  are contradictory. In some cases, the high BMI at the time of diagnosis and the increase in BMI during the disease is related to a higher PCSM (9, 11-12, 15). In contrast, other shows a protective association between these two variables (16).

Regarding the relation between BMI increase and PCSM increase, despite not finding a statistically significant association, this relation seems to be affected by other variables of obesity such as abdominal girth, specific biochemical markers (HDL, LDL, adiponectin) or height. Some of them seem to positively  influence an increase  in PCSM, such as height. Perez-Cornago et al. (15) associated a tall person with a normal BMI and high adipose tissue mass with a higher risk of PCSM. However, the inverse relation between height and BMI does not mean that tall people with a lower BMI have lower levels of adiposity. These data may lead to a false association between BMI and PCSM (9, 14). Yang et al. (17) did not find an association between BMI and PCSM. Nevertheless, when comparing this study with the one by Chalfin et al. (18), an association with a higher risk of aggressivity, progression and PCSM was observed. This revealed that obese men have a higher probability of suffering a more aggressive and higher relapse risk PC.

Along with the study by Chalfin et al., Wang et al. (12) also showed a positive association between BMI and relapse risk; PCSM; death rate and metastasis suffered by PC patients treated with radiotherapy. Reference is made to a multivariate analysis of age, androgen deprivation therapy and PSA pre-treatment as a log-transformed variable. Applying all these variables at the same time could lead to confusion. Therefore, data should be analyzed separately to avoid potential bias. Consequently, a new study model is needed, which takes into account BMI of the sample and the type of treatment depending on the patient and PC stage to determine the mechanisms involved in obesity and PCSM, and to determine whether or not an association exists and, if that is the case, what type.

Cantarutti et al. (11) found a correlation between  a high PCSM and high BMI as compared to a normal BMI at the time of diagnosis. Their results also showed that a lower BMI also implied a higher PCSM although, in those cases, mortality from other causes also increased. These data are in line with those collected in the literature (19, 20).They suggest that  different BMI ranges need to be further explored, i.e., to assess both the low and high ranges and their relationship  to PCSM.

The study by Vidal et al. (13)showed that BMI is not associated with an increase in PCSM. However, when comparing these results with those of Halabi et al. (21), it they concluded that there is a protective factor between high BMI and PCSM. Two theories can explain this protective role. On the one hand, a higher BMI means less cachexia, in addition to providing protection against possible future cachexia (which would increase life expectancy of PC patients). On the other hand, obese men have increased estrogen formation caused by adipose tissue, and this hormone in turn inhibits the growth of PC (22). This idea is supported by Greenlee et al. (23), who compiled 22 clinical trials on the association between BMI and mortality of different types of cancer with their treatments. No association was found between BMI and the mortality of any type of cancer. However, it was observed that in specific cases of PC treated with androgen deprivation therapy, it was statistically significant that high BMI acted as a protective factor in relation to PCSM. These results shed new light on the protective role of adipose tissue and its endocrine function.

Regarding this protective role, the study by Dickerman et al. (24) on the association between visceral fat and advanced and fatal  disease is also worth mentioning. They described that this association is stronger and statistically significant among the patients with a BMI <27 kg/m2 and weaker and non-significant among those with  BMI ≥ 27 kg/m2. However, the CIs obtained, as well as evidence for heterogeneity of BMI  were not statistically significant. This casts doubt on the validity of the results.

Also relevant is the study by Langlais et al. (25)on the influence of having a high BMI at the time of diagnosis in the erroneous staging of the tumor. This error may lie in making the diagnosis, since the tests carried out might be misinterpreted due to the patient’s obesity. This can lead to erroneous therapy and therefore, a worse prognosis of the disease.

Finally, the study Dickerman et al. (26) analyzed the increase in BMI from age 21to the time of PC diagnosis and found no association. . This means that lifetime weight gain did not influence the aggressiveness of PC. However, to prove the influence on this association, a pre-determined age range closer to the age of risk for PC should be studied.

Limitations of the study

A broader research should be conducted, considering grey literature, clinical trials with subgroup analysis working on mortality/survival based on BMI, and the possible existence of unpublished work. In addition, the range of years in the literature search should be extended, and other markers of obesity should be included to better assess the effect on prognosis of PCSM (16).

No statistical, sensitivity or validity analysis of the studies have been performed during the screening and selection process, as well as quality assessment of the studies in a systematic manner by the authors independently. Nor was an analysis performed according to the patient time included in the studies or the stage-aggressiveness of the PC they suffer.

The current literature seems to indicate that obesity is a poor prognostic factor in PC but there is not enough evidence to support this. Consequently, studies with more concrete and specific methodologies are needed as the detrimental effect of obesity in this type of cancer is still unclear. It would be convenient to consider other markers of obesity apart from BMI (HDL, LDL and adiponectin) to shed new light on the possible influence (or not) of these markers independently or jointly in the prognosis of PC.

This paper is part of the Teaching Innovation Project coordinated between the Faculty of Medicine and the Faculty of Translation and Interpreting of the University of Granada (UGR), within the framework of the FIDO Plan 2018-2020 of the UGR (code 563).

This paper did not require the approval of any ethics committee.

The authors of this paper declare no conflicts of interest.

No funding was received for the production of this paper.

Any cookies that may not be particularly necessary for the website to function and is used specifically to collect user personal data via analytics, ads, other embedded contents are termed as non-necessary cookies. It is mandatory to procure user consent prior to running these cookies on your website.